Discover some of our most popular adventures in Myanmar:

Lap up every incredible moment in Myanmar on this beautiful cycling adventure. 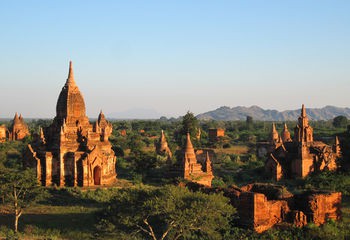 Bow down to the magical allure of Myanmar on this mesmerizing bike trip.

Search all tours in Myanmar

Having survived one of the most brutal regimes in history, the Southeast Asian country of Myanmar (formerly known as Burma) is bouncing back with some of the world's most unspoiled natural and archaeological sites. Its geographic location, placing the country between Bangladesh to the west, China to the north, and Thailand and Laos to the east, gives the country an eclectic influence of religion, language, and peoples. With the country only recently being reopened to the outside world, the infrastructure commonly found in other nearby countries is almost completely lacking in Myanmar, making it an adventure destination for those willing to cycle it.

The fertile Irrawaddy River valley has been the backbone of Myanmar since its earliest settlement. To this day, the river is still the most well used transportation corridor in the country. Since Myanmar has lacked the economic infrastructure of most other countries, large swaths of its natural environment and landscape have been left relatively untouched, making for difficult yet extremely rewarding trekking. Whilst cycling certain parts of Myanmar you can find elephants, leopards, clouded leopards, tigers, monkeys, and wild buffalo, most of which can be quite difficult to find in the surrounding countries

The former capital city of Yangon lies just inland of the delta of the Irrawaddy River and the Andaman Sea and is the country's commercial and cultural beating heart. Yangon is lacking what nearby cities like Bangkok, Singapore, and Ho Chi Minh City have, but not in a bad way. The city is a sprawling chaotic mess that is entrancing and exciting to explore. Most visitors head north from the city, traveling along the Irrawaddy to the ancient capital ruins of Bagan, where over 2000 structures are spread amongst 40 sq kilometers (15.4 sq miles), making for some of the most memorable days in all of Myanmar. The new capital of Nay Pyi Taw is an unusual sight: it covers an area nearly an order of magnitude larger than Berlin, yet sits almost completely empty. You can cycle down 20 lane highways without seeing a single car. Mandalay is the northern capital; here you can see the restored Mandalay Palace and its grand moat. The southern stretch of Myanmar borders Thailand and features some of the world's most stunning beaches, without the usual shoulder-to-shoulder resorts that go along with it.

Myanmar can be a challenging country to cycle yet it yields some of the most rewarding scenery and cultural experiences you will find anywhere. There is a lack of common infrastructure, such as paved roads, in most places, but for a country that has relied on river travel for thousands of years, this is not unexpected. From the temples at Bagan, to the bustling markets of Yangon, to the empty beaches of the south, Myanmar is eager to leave the atrocities of its past behind and enter a new era of prosperity and growth; just be aware that there are travel restrictions as large parts of the country are still off limits to tourists.