Discover some of our most popular adventures in Japan:

An immersive tour of Japan's Noto peninsula, from Kanazawa to Takayama. 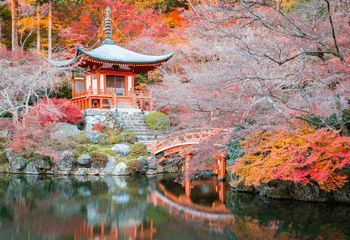 Discover the best of rural and modern Japan on two wheels over an unforgettable fortnight as you cycle tour from Tokyo to Kyoto. 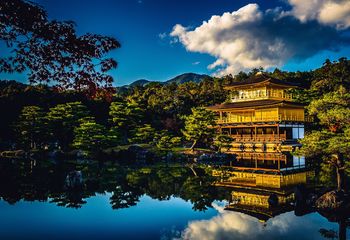 Delve into Japan's colorful history on this 7-day cycling tour of the Kansai region.

Search all tours in Japan

A land of futuristic cities and millennia-old traditions, cycling through Japan seamlessly blends fantasy with science fiction making it one of the most memorable destinations in the world. The landscape of Japan adds to it fantastical characteristics as the island nation is a mixture of volcanic hills and mountains, low lying rice paddies, and beautiful coastlines. There are natural hot springs, pristine rivers and lakes, bamboo forests, and the iconic cherry blossoms, all accessible via astonishingly smooth blacktop pathways and relaxing country lanes. Japan is almost entirely mountainous, with a comparable percentage of mountain-mass to countries like Norway. There are four home islands (Honshu, Hokkaido, Shikoku, and Kyushu) and 6,852 islands in total. Japan shares no land borders with any other countries and has a climate that ranges from cool temperate in the north to subtropical in the south.

Japan may be the land of megacities, yet if you wander just off the beaten path you can quickly find yourself in a village that seems to have been lost in time. The organized chaos of cities like Tokyo quickly tapers out into the zen countryside of areas like the Noto Peninsula once you cross the Japanese Alps at Nagano. The culturally jam-packed Kyoto in central Japan is a trip unto itself; it also makes a great jumping-off point for exploring the western and eastern coastlines. Northern Hokkaido is a wilderness and a skiers’ paradise, as sophisticated and lively Sapporo gives way to Japan's largest and most remote national parks and wilderness reserves. The island of Kyushu south of Honshu boasts an enjoyable climate, interesting terrain, and a plethora of natural hot springs to soak in after a day's ride.

From the temples of Kyoto to the remote mountain peaks surrounding Sapporo, and don’t forget the palm tree lined beaches of Okinawa, Japan is entirely accessible via bike lanes, bullet trains, and fast ferries. Japan’s culture, history, and natural environment is astonishingly accessible by bicycle thanks to its ultra-modern infrastructure, so making the most of the islands from the seat of your bike is easier than you might think. Tour operators are available in almost every city and town, as are bike rental businesses making Japan one of the world's easiest and most interesting countries to tour by bike. Spring and fall are generally acknowledged as the best time to explore the country as the weather is ideal and the landscape will have exploded with the colors of cherry blossoms and Japanese maple trees.