Discover some of our most popular adventures in Taiwan: 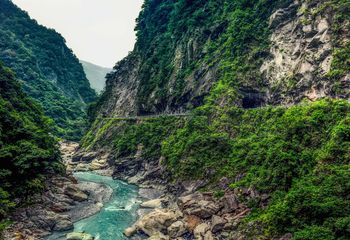 See the whole of Taiwan, from Taipei to Kenting, Taroko Gorge to Kaohsiung, along quiet, smooth roads

Search all tours in Taiwan

Located off the eastern mainland of China, the tiny island of Taiwan goes grossly underrated by the global tourism market. Being only 400 kms long and residence to a staggering 23 million people, Taiwan was home to unsurpassed economic growth and development, labeled the ‘Taiwan Miracle,’ in which it saw its economy grow to become the 22nd largest in the world in a mere 50 years. The idea that Taiwan is an industrialized urban sprawl with factories and warehouses as far as the eye can see may be true for parts of the west, but the wild mountains of the central regions and the forgotten eastern coastline are paradises for the lover of nature.

The capital city of Taipei was meant to be a temporary settlement; it’s since stayed to become the financial and transportation capital of the island. Three million inhabitants are crammed into the northern capital, making this one of the most compact and dense cities in the world. However, the city is backed right up against the lush mountains, and it’s easier than you might think to escape the urban sprawl and get into nature. The west coast of Taiwan is dominated by cities and manufacturing, but the eastern coast is a lush, green oasis of forest, hot springs, and authentic villages giving reprieve from the urban madness.

The eastern coastline of Taiwan completely upends any preconceptions of Taiwan being an industrialized urban wasteland. The central mountain range provides ample barriers to the urban mass of the west, creating a green oasis with one of Asia's most spectacular coastlines. The Taroko Gorge in the Taroko National Park is a must-visit, as is the Qingshui Cliff. There is no shortage of hiking, cycling, sightseeing, beaches, and hot springs to visit while cycling the eastern coast. The east is ethnically diverse; seven separate tribes live in the east, making it a cultural hotspot filled with happy and eager to help locals. Taiwan may be a global manufacturing center, but it is also an adventure waiting to happen.